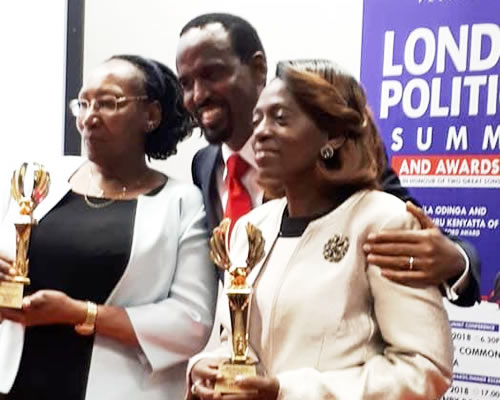 Kenya President, Uhuru Kenyatta and the country’s former Prime Minister, Rt Hon. Raila Odinga were both honoured with inaugural African Leadership awards at the London Political Summit and Awards held at the London Metropolitan University on Friday night. The awards were in recognition of the Peace Initiative agreement that they both signed to, after the violence and killings that marred last year’s Presidential election which Kenyatta won.

Although neither of them was present but each sent a representative. Odinga, who won the African Political Leader of the year award got his goodwill and acceptance message delivered by a former Deputy Secretary-General of the Commonwealth, Dr. Josephine Ojiambo. In it, he tasked other African Nations to take a cue from the Kenyan peace initiative. Besides, he also said he hopes for a new world order devoid of ethnic cleansing and poverty. Speaking further, Odinga said the award “heralds peace among Kenyan people and the entire African continent.”
london-summit-2018-002-2
Meanwhile, Uhuru’s award was received on his behalf by Mrs. Grace Cerere, the Acting Kenya High Commissioner in the UK.

Other awardees on the night included the Shadow Home Secretary, Dianne Abbott, who doubles as the first Black British woman to be elected into the House of Commons. Not surprisingly, the Hackney Member of Parliament was honored with the Black British Politician Award of the year award.

Councillor Susan Fajana-Thomas, who picked the award on her behalf, described Abbott as a barrier breaker for black and ethnic minority women in British politics.
Attendees at the event included the Worshipful Mayor of Islington, Cllr Dave, the Deputy Mayor of Enfield Cllr Kate Anolue and Dr. Alistair Soyode, BEN TV founder and Presidential candidate of YES Party.