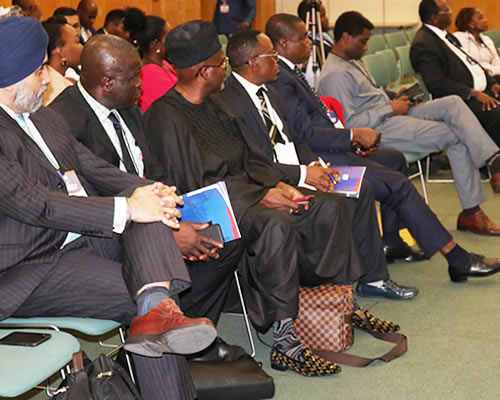 The Hug and the Church

•           The spirit of Handshake was affirmed by the Hug in August which took place at a National prayer breakfast. The role of the church as a non-state actor is central to transforming the role and dynamics of political leaders and is a powerful force of transnational transformation.

•           The mission was able to provide an apology to the peoples of the Caribbean as one step on the way forward – towards reparations for the peoples of African descent following the inhuman transatlantic slave trade.

•           As diplomats, politicians and historians, we are aware that the healing process will require much more effort. However, a sincere, empathetic apology, dialogue, reparations and restitution are the right approach. I ask us to consider this approach to solving Africa’s democratic challenges as pan Africanists and as people of African descent.

•           The two leaders are committed to tackling ethnic antagonism and competition along with addressing deterioration in national ethos, inclusivity, devolution, safety and security and corruption.

•           The Taskforce has commenced work on what is now known as the Building Bridges Initiative. It has undertaken preliminary work of seeking citizens’ voices on 9 issues under examination.

•           For instance, the Taskforce is convinced that combating corruption will entail the creation of conditions for individual citizens, groups and communities to set the cultural and social conditions that uphold integrity, honour and our constitutional values.

•           The Taskforce has also requested the public to send in proposals on the nine-point Joint Communique that aims to foster durable unity. Members of the public and stakeholder groups have been asked to send in clearly outlined policy suggestions, administrative reform proposals and implementation modalities for each identified challenge area.

•           The aim of the submissions will be best considered if they seek to provide solutions on how Kenyans and Kenya can build lasting unity by tackling the challenges articulated in the Joint Communique.

•           This Building bridges process will address even the most challenging and sensitive issues, such as police killings in Kisumu and Kibera. Accountability – even if it’s just command responsibility – will go a long way in building cohesion.

•           The process must lead to genuine reforms of institutions, systems and processes that spawned and contributed to current problems and divisions. Work and deliberations in the five thematic areas must be thorough, open and transparent.

•           This effort will put forward ideas on how the country can bridge inequalities and strengthen inclusion. This should include some longstanding injustices, including access to land and restitution to victims of state harassment and brutality.

•           Although the handshake was a political settlement, it can be an opportunity to address critical issues if there is genuine political will. Both the President and the Prime Minister have and continue to emphasize that they are committed to bringing the country together.

•           It is important that the process be citizen focused, inclusive and participatory. In this regard an important grouping the “Dialogue Contact Group” has been formed. This group provides an all-inclusive, sector-wide stakeholder engagement.

•           Some of the key stakeholder groups to be consulted and involved in this work include but not limited to: the academia and educational institutions; to Faith-based organisations; business and corporate sector representatives; informal sector actors and matatu operators; cooperative societies, women and youth groups; former and current parliamentarians and political leaders; and the large Kenyan diaspora community. It will also reach out to entertainers, media personalities, bloggers, socialites and celebrities.

•           The leadership of this group has been mandated to undertake the review of the Constitution.

•           Who will keep the government in check? Will the political process lead to the evolution of two strong parties with alternative ideologies as in Britain and the United States of America? This remains to be seen.

•           In our experience, non-state actors have been very instrumental in providing civic education to Kenyans with the broad aim of achieving fundamental national transformation through public policy, legal and constitutional as well as institutional reforms and transformation as well as creating public awareness by re-orienting the national paradigm and psyche for mainstreaming constitutionalism and engendering robust public participation and engagement.

•           The non-state actors play a valuable role of ensuring sustainable information and awareness on the political, social, economic and constitutional issues and challenges affecting the citizens.

•           They enable citizens to actively engage the government – national and county as a core civic duty, always helping the citizens to productively participate in decision-making and policy formulation on all matters that affect them.

•           Through the non-state actors, citizens are helped to inculcate a culture of adherence to the principles of the rule of law and the constitution as key to good governance and public administration, public dialogue and engendering democracy.

•           The non-state actors have always also played a key role in developing a culture of constitutionalism, respect to the rule of law including promotion of the dignity, integrity and visibility of fundamental human rights and freedoms.

•           Equally, non-state actors play a pivotal role in fostering a system that ensures governmental responsiveness to its citizens and citizens’ responsibility for keeping the government always in check.

POLITICAL DEBATES IN KENYA: ARE THEY USEFUL OR EMPTY MEDIA SPECTACLES?