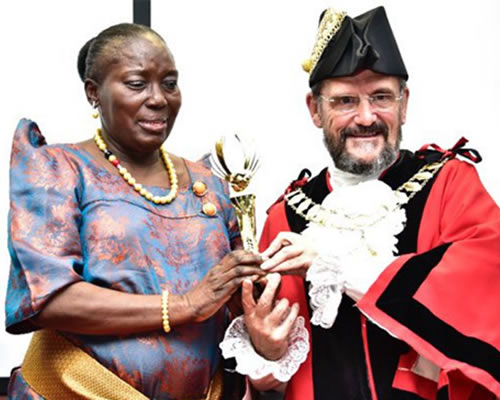 A British thinktank has defended giving an award to the politician from Uganda behind the infamous ‘Kill the Gays’ bill.

Rebecca Kadaga is the House Speaker in the Ugandan parliament and was recently award the African Parliamentary Speaker of the Year award by Ring4Change at its recent London Political Summit (LPS).

She received the award in a ceremony last week at Portcullis House, part of the British Parliament estate.

Kadaga is notorious for her anti-gay views and has led the country’s political push to criminalize the LGBTI community. Most recently, she managed to block discussion of any LGBTI issues at the world’s biggest assembly of parliament.

Ring4Change is a ‘pro-democratic organization; advocating and projecting the power of vote’. Its LPS is a ‘platform geared to enhancing political enlightenment and democratic emancipation’.

This has nothing to do with homophobia

‘This award doesn’t have anything to do with her homophobic views,’ Godson Azu, the Summit director told Gay Star News.

‘She is a remarkable woman parliamentarian and her record to improve the situation in Uganda is very good. We thought she’s been a strong political figure and that’s why we gave her the award.’

Azu argued that the LPS has a ‘liberally minded view of sexuality’, but Kadaga’s views on homosexuality were her own business. The LPS wanted to celebrate that Kadaga was a strong female leader because there were so few of them in Africa.

‘Everybody has a right to believe in what they want,’ he said.

‘She has been a politician for more than 20 years and overcome many challenges and still hold on her to position. She has made a lot of change for Uganda and that should be commended.’

When pressed on what message Kadaga’s award sent to LGBTI people in Africa, Azu said LGBTI should take on leadership roles to ensure their equal rights. Homosexuality is illegal in several African countries. In Uganda, LGBTI people are not allowed to hold Pride events and face regular persecution.

He also said the LPS would consider giving one of its future awards to a LGBTI leader but ‘not if that person is trying to impose their views’ on the majority.

Huge step back for LGBTI equality

‘I totally agree that people should be awarded or recognized for their good work. Unfortunately, I don’t think there is a standard threshold followed by some of these awarding bodies,’ he said.

‘Hon Kadaga’s actions have made some LGBTI Ugandans to flee their homes, led to discrimination, torture, persecution, prosecution and possibly lose of life for Ugandan LGBTI people.’

Sesange felt surprised the award ceremony took place at Parliament House in London, a place where the Equality Act and same-sex marriage became law. British parliament and the LPS should be ‘ashamed of themselves’

‘The UK parliament can not have it both ways, first claiming to be the most progressive and LGBTI-friendly parliament in the world at the same time holding award functions for the most anti-LGBTI legislator in the world,’ he said.

‘The award to Hon Kadaga in the British Parliament was a big setback  in the struggle for LGBTI equality.’

Despite providing a room for the awards, the London Metropolitan University distanced itself from the event.

The spokesperson said the university has support Ring4Change and the Summit since 2016 based on its objective of being ‘pro-democratic’.

‘This year we were asked, at short notice, to provide a room for the Summit’s award ceremony. London Met was not involved in any aspect of the award ceremony including the selection of award recipients. Awards presented at the summit were not in any way associated with the University,’ the spokesperson said.