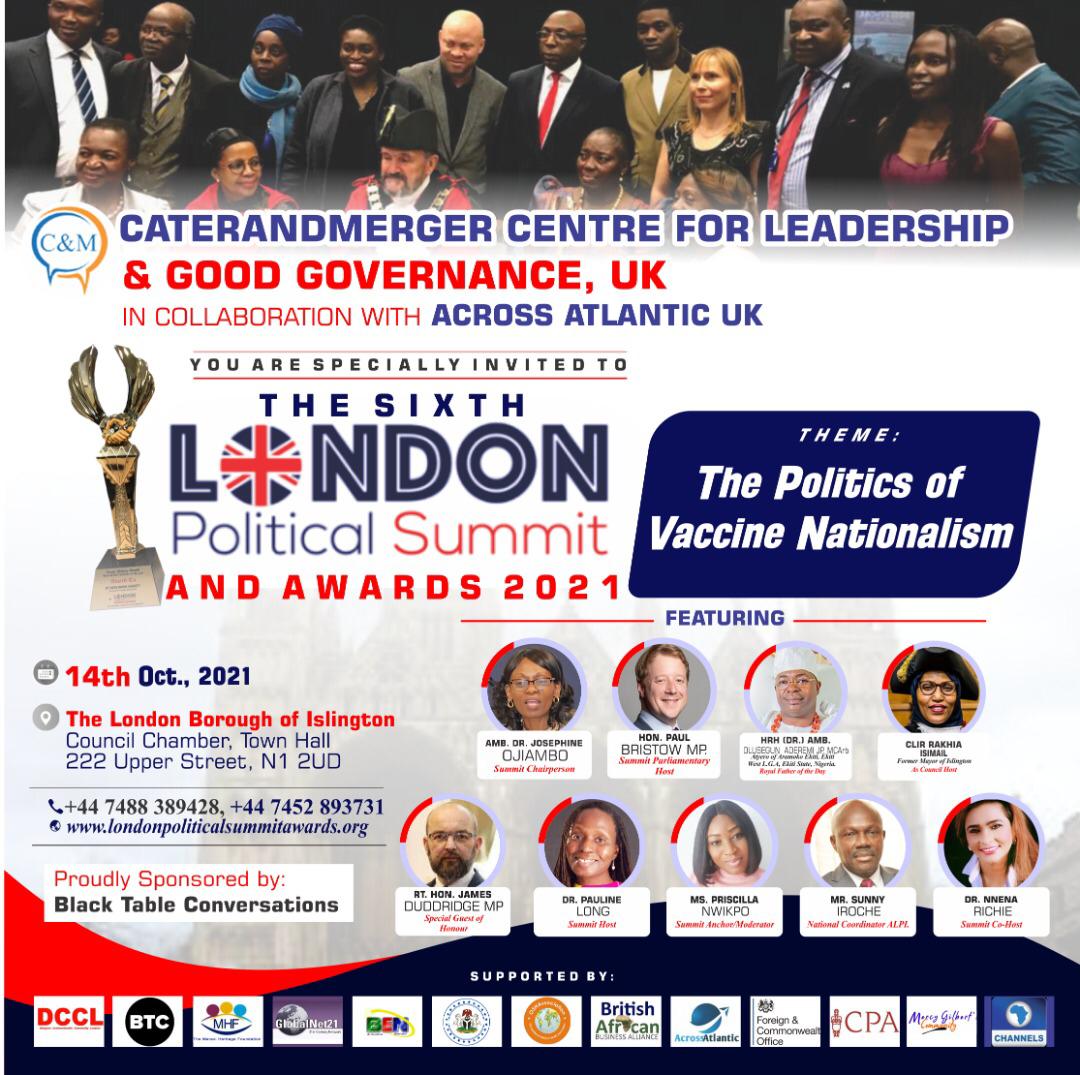 The Sixth London Political Summit and Awards is set to hold on Thursday, 14th of October 2021. Below is the press statement released by LPSA 2021

1. The London Political Summit and Awards is a socio-political platform that began in 2016, with the support of key political leaders of thought and the academia. Over the years we have seen great contribution during the past summits, this has evolved to the establishment of the Annual Uhuru/Railia African Peace Accord Awards, in honour of the two great sons of African politics, President Uhuru Kenyatta of Kenya, and his brother, Rt. Hon. Raila Odinga the former Prime Minister of Kenya, whose peace accord initiative in 2018 brought about democratic peace in Kenya politics. The main advocacy of the London Political Summit is to propagate and advance the need for political order, democratic peace and good governance among developing countries, through dialogue and diplomacy. At this year’s summit we will be discussing the present challenges of the Covid pandemic and the relative solutions with the theme – “The Politics Vaccine Nationalism”.

2. This year’s summit is hosted by the Borough of Islington Council. The Borough has remained very significant to the existence of the summit, as we have held the summit in 2016, 2017, and 2018 respectively at the London Metropolitan University, Holloway Road which is situated in the borough. Furthermore, in 2018 we had the privilege of the Mayor, Cllr. Dave Poyser, as the Special Guest of Honour. We have also received the kind support of Cllr. Rakhia Ismail, the immediate past Mayor of Islington, she has been supportive of the summit since its inception in 2016. We are sincerely grateful to the support and this year we are back in the Borough once again, thanks for Clir. Ismail and the Worshipful Mayor of Islington, Cllr. Troy Gallagher for hosting the summit.

3.The Worshipful Mayor, Cllr. Troy Gallagher, will be joining us as Summit host to welcome our invited guests and awardees to the Borough. The Summit Chairperson is Amb. Dr. Josephine Ojiambo, former Deputy Secretary. General of the Commonwealth, and former Kenya Ambassador to the UN, she will be joining us virtually via zoom from Nairobi, Kenya.  Our Special Guests of Honour, Hon. Paul Bristow MP, for Peteborough and Member Commons Health Select Committee, will be with us at the summit. Two great city of London Political leaders in the persons of Cllr. Adams Jogee, The Worshipful Mayor of Haringey Council and Cllr. Michael Desmond, the Hon. Speaker of Hackney Council, will be joining us in the Council Chamber for the summit.

4.This is the first time in the six years of the summit’s existence that we are having such an honour of three Borough political leaders, it reflects the growth and progression we have been able to cultivate over the years. Also joining us at the summit is Hon. Prof. Steve Azaiki. OON, Member House Committee for Foreign Affairs, Nigeria House of Representatives. HRH. Amb. Dr. Olusegun Idowu Aderemi JP. Paramount Ruler, The Atayero of Aramoko in Ekiti State and the president of OSHA UK&Nigeria Regions, HRH. Oba. Dr. Olufolarin Olukayode Ogunsanwo, The Alara of Ilara Kingdom, Sir Sonny Iroche, Leader Abia Professionals Nigeria. We will also be having with us His Excellency The President of Sierra Leone, represented by H.E Amb. Dr. Morie Manyeh,The High Commissioner, Sierra Leone High Commission, United Kingdom.

6. Our awardees from the past editions include Hon. Helen Grant MP, Worshipful Mayor Kate Anolue, Dr. Alistair Soyode, Baroness Dr. Neena Richie,Rt. Hon. Dr.  Rebecca kadage, President Uhuru Kenyatta, Rt. Hon. Diane Abbot to name a few. Continuing our tradition, this year’s Summit will be honouring some key political and community champions for their outstanding contribution to good governance and democratic peace, as well as media networks, such as  Channels TV,  BBC and Colourful Radio, for the efforts in projecting community and national issues, as we celebrate the Black History Month 2021.

7. Due to the venue capacity and health precautions, we would looking forward to having you join us physically and virtually via the zoom link. Thanks for your understanding and kind support.