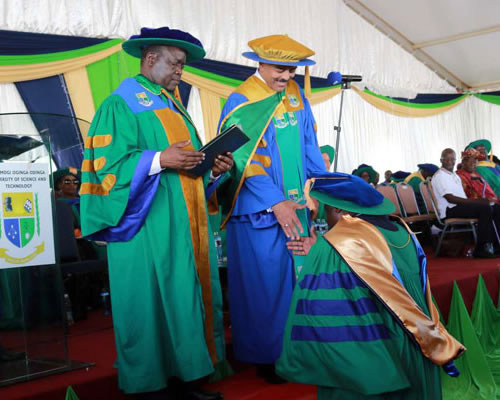 A local public university that is due to honour President Uhuru Kenyatta and opposition leader Raila Odinga says the two have pushed for an environment that promotes scientific innovations.

The Jaramogi Oginga Odinga University of Science and Technology (JOOUST) says it will honour the two with honorary degrees because their “handshake’ allowed innovators to work.

The two leaders will be conferred with honorary doctorate degrees at the institution’s main campus in Bondo, Siaya County when it holds a graduation ceremony on Friday.

Prof Stephen Agong, the vice-chancellor of JOOUST told the Nation that they are honouring the two leaders for their peace initiative following their March 9 handshake that ended weeks of political turmoil after the disputed 2017 Presidential election.

“Our theme for this year’s graduation is ‘Science, Technology and Innovation for Peace and Socio-Economic Development’. This decoration, therefore, really fits within that realm given that our two leaders have demonstrated that they are true statesmen by causing peace and harmony for our beloved country.